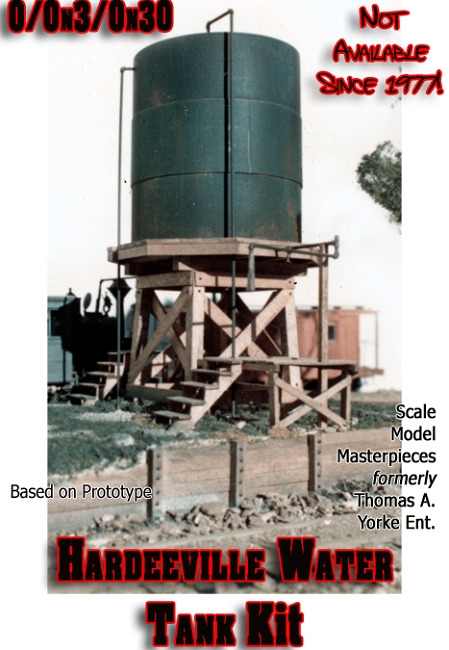 Originally offered in 1977 by Thomas A Yorke Ent. as an O Scale kit and now maybe available in three or four other scales as well.
The prototype for this former Thomas A Yorke Ent (now Scale Model Masterpieces) kit was built for the Argent Lumber Co. of Hardeeville, South Carolina in the USA. The Hardeeville tank was located in the Argent mill yard and was used up until the close of the road in 1956. The spout clearance was only 8 feet above rail head and was used for engines such as the N.B. & W. 2-6-0 (imported by L.M.B. some years back) which became Argent #2.

Based upon the feedback that we receive

will determine which other scale(s) that we offer this Hardeeville Water Tank Kit. This kits is easily adapted to fit any layout and has plenty of information and drawing to enable the builder to construct something truly unique. .... Continued in DEBenLLC Blog 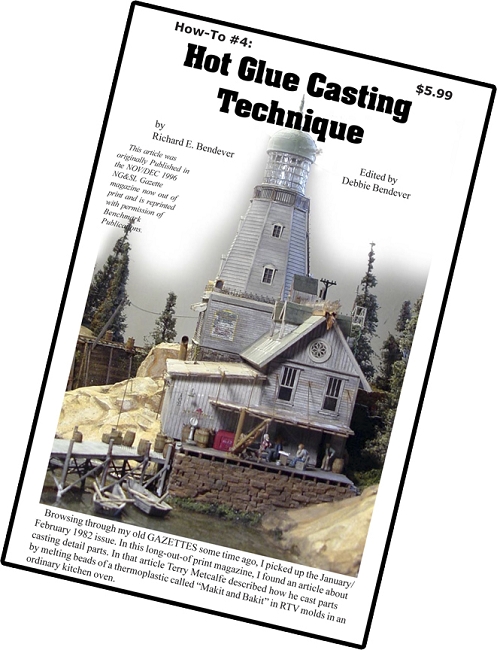 A number of years ago I was browsing through my old Gazette magazines and I picked up the January/February 1982 issue where I found an interesting article. In this long-out-of print magazine, I found an article about casting detail parts. In that article Terry Metcalfe described how he cast parts by melting beads of a thermoplastic called “Makit and Bakit” beads in RTV molds using an ordinary kitchen oven.
As a former Mold Maker/Tool & Die maker, I am quite familiar with the plastic injection process which if you were not aware is how many of our daily plastic products are made. I tried Terry's technique several times in my plethora of RTV rubber molds and I just could not get them to come out as well as his article discussed. One day I happened to be using a hot glue gun in my hobby room and I had an epiphany. And the rest is history.

I published this modeling technique article in the Narrow Gauge & Short Line Gazette (Nov/Dec 1996. pp. 72-76) almost 30 years ago and hardly a week goes by that someone doesn't ask me something about it. With the permission of Bob Brown & Benchmark Publications we've re-released this technique as a Doctor Ben's How-To booklet with some additional information as well as full-color photos. If you already have a copy of this Gazette issue you may not need to purchase this booklet. However, the magazine article will not have the color photos and additional information that we are including in this How-To #4 booklet. The How-To #4 booklet will become available about November 15th or sooner for $5.99 + postage.